On the margins: Vulnerable populations in a changing climate

Indigenous peoples representatives from all around the world march for action to fight climate change at the 2015 World Climate Change Conference in Paris, France. Photo by Reuters.

In investigating climate change, scientists often focus on projecting their results into the future, to contextualize the effects of global warming and extrapolate to future environmental consequences. While this information is certainly useful, it tends to detract attention from effects that are already underway right now. A great volume of research has documented how ecosystems are being degraded in various ways, from coral reefs to polar bears. However, I think it is also worth researching how anthropogenic climate change is affecting humans ourselves.

Unsurprisingly, the groups of people who are suffering the most from a changing global climate are marginalized groups, especially indigenous and impoverished people who are often especially vulnerable to the effects of climate change.

At all latitudes, Across all borders

The problems marginalized people face are numerous, and can vary widely depending on the region in which they reside. People require access to resources like food, clean water, shelter, and functioning infrastructure. Climate change has already begun to threaten these needs in many vulnerable populations.

Majhi in Nepal. One dire example is the Majhi community in Nepal. Nepal is a very diverse country that has 63 different indigenous peoples, comprising 36% of the country’s total population. These indigenous groups are extremely vulnerable to climate change, along with most of the rest of Nepal.

Nepal’s vulnerability comes from a variety of factors. Nepal is seismically active, making it prone to devastating earthquakes like the 7.8 quake in 2015, which killed and injured thousands and displaced many more. Due to Nepal’s underdevelopment, earthquakes quickly dismantle infrastructure and leave people homeless. Nepal is also a landlocked mountainous region, resulting in a serious dearth of natural resources, as there is no marine access and very limited arable land.

The Majhi people are just one of many Nepali communities struggling to survive. While their ancestors historically fished on rivers, overcrowding has reduced the efficacy of fishing, so they must now supplement their livelihoods by attempting to grow crops and raise livestock on limited land.

Climate change has brought new problems to the Majhi people. Extreme rain events like droughts and floods have increased in severity and frequency, which has made agricultural production drop significantly. A longer summer season has also increased susceptibility to malaria by facilitating increased proliferation of mosquitos in the prolonged summer heat. These problems require serious intervening efforts, which the Nepali government is not capable of fully delivering following the 2015 earthquake.

Inuvialuit in Canada. Over 8,000 kilometers and an ocean away, the Inuvialuit people in the Canadian Arctic are facing different problems from the same basal cause of climate change. The Inuvialuit are a group of indigenous people residing in Northwestern Canada, along the Beaufort Sea. Because of their dependence on their local Arctic resources for culture, tradition, and subsistence, warming is a serious threat to their existence.

Inuvialuit community members perform a traditional dance to celebrate an agreement signed by the Canadian Government to protect their land. Photo courtesy of L.W. Dahlke.

The Inuvialuit depend on caribou and seal hunting and fishing for much of their food, and anything that disrupts their ability to hunt or fish has important consequences. Increased warming is degrading the permafrost, and drastically overflowing rivers with meltwater. This presents barriers to Inuvialuit transportation, since they depend on snowmobiles for their transport to many hunting areas.

Some Inuvialuit people are also noticing an increasing randomness in their weather. Where they used to be able to reliably predict inclement weather, storms now last longer, occur more frequently, and can come out of nowhere. Big storms affect the community’s ability to access their marine resources, as waves and wind become increasingly strong, making boating and snowmobiling extremely dangerous. Bigger, more dangerous waves are restricting their ability to hunt for caribou, seals, and beluga, since they can often splash into boats or careen them into sea ice.

There is an ongoing research effort in the region of the Inuvialuit to document climate change and its effect on the indigenous, marginalized people living there. In this process, interviews and contributions from the Inuvialuit have proved to be especially informative, highlighting the importance of including local marginalized people when studying the effects of climate change. 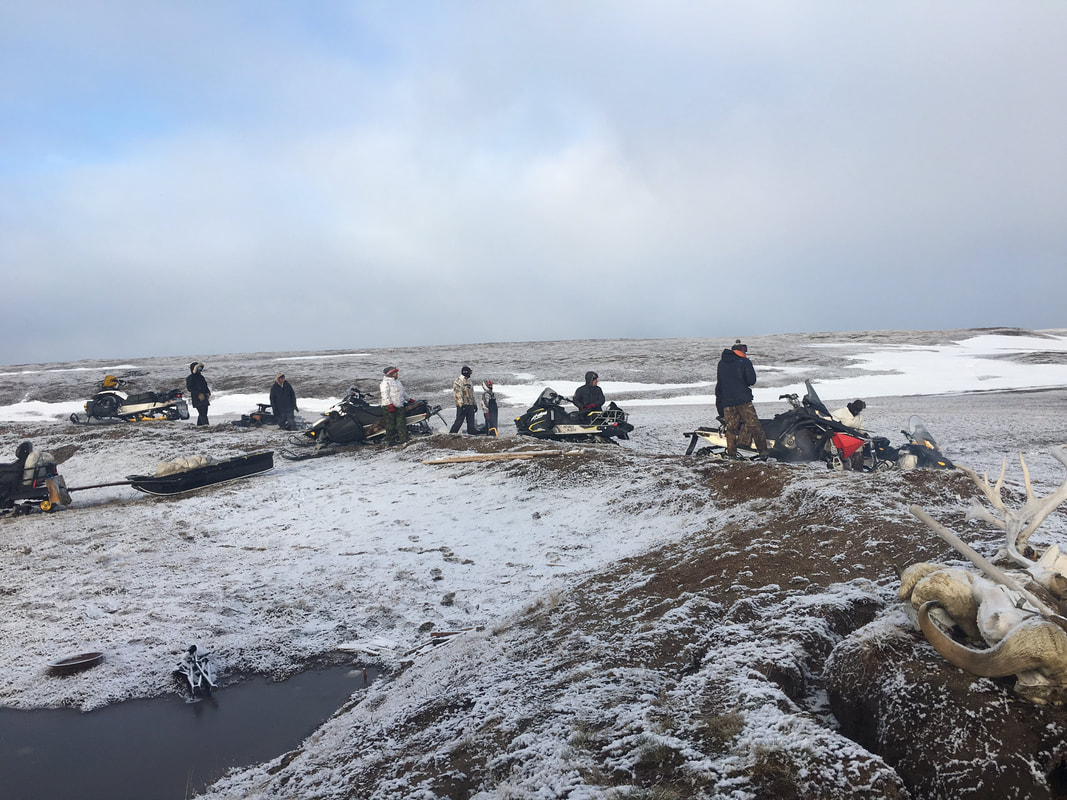 Lack of snow on the ground makes it difficult for Inuvialuit to travel by snowmobile. Photo by Vernon Amos.

Reading in the Margins of the 2018 Bevan Series

As the effects of climate change continue to wreak havoc on many of our world’s indigenous and impoverished people, our Bevan 2018 speakers have spoken about many other marginalized and indigenous peoples who depend on the ocean for their livelihoods, culture, and nutrition.

An aboriginal fisherman poses with a tropical rock lobster caught by hand in the Torres Strait. Photo by Amanda Clark.

Dr. Éva Plagányi, a mathematician from CSIRO in Australia, presented her efforts with indigenous islanders in the Torres Strait off the coast of the Cape York Peninsula. She integrated indigenous stakeholder interests into her management model in an effort to represent the social aspect of fishery management. The result was a management model which showed the costs to the indigenous populations for each management solution.

Journalist Lynda Mapes spoke of her close association with Washington Native American tribes as she reports environmental news for the Seattle Times. She told of how Native Americans were the first to report catching farmed Atlantic salmon after an accidental release in August 2017. Mapes is able to use her position as a journalist to give Washington’s indigenous peoples a platform to voice their interests.

Dr. Christina Hicks of Lancaster University shared her research from fisheries in East African coastal communities. By compiling data on the nutritional value of the fishes that these African communities are currently catching and eating, Hicks hopes to uncover potential opportunities to combat nutrition deficiencies. Through her consideration of the marginalized African coastal communities, Hicks is researching how to best help these people survive on the diminishing marine resources they have.

First Nations people in British Columbia setting a reef net for the first time in over a century, after the practice was finally legalized again. Photo by the Canadian Press.

And finally, Dr. William Cheung of the University of British Columbia projected the future effects of climate change on First Nation peoples in B.C. Using data provided by the indigenous people all along the Pacific coast, he showed that their fishery resources are likely to shift northward with the warming waters.

Showing the future effects of climate change is a powerful tool to garner support for policy action, but marginalized people are ALREADY living in an environment transformed by climate change. As scientists, as citizens of the world, and as ethical humans, it is our responsibility to do something to help those vulnerable people find solutions to live with the challenges that climate change has wrought upon them.

Max Urbanek is a Biology and Environment Science student at the University of Washington. His interests are in the intersections between ecology, climate science, and marine and terrestrial systems.