For the third and final day of HAZWOPER training, we started the day with Dick Walker himself, on a trip down memory lane. On the conference room table he’s laid out an odd assortment of glass bottles sealed with tape, wrappers, matches, connectors and tanks.  To most people it looks like a trash heap, but Dick and team used to do a lot of these types of HAZMAT clean-ups, several a week, in fact. Methamphetamine Labs. 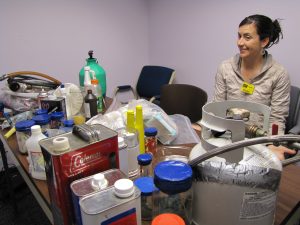 Liz looks on at the table Dick has set.

Turns out a host of highly flammable solvents, gases, acids, bases and oxidizers are used in the process of making meth, and this kept the Department of Ecology folks busy (too busy) from about 1980-2000. “In houses, trailers, hotel rooms, they were everywhere,” recalls Dick, “sometimes were were still processing a scene and they would come back.” With cold medication behind the counter in the early 2000s, the meth cleanup has all but stopped.

Which means spill response and cleanup can focus on places like our next stop, Fisherman’s Terminal. After several days of reported sheens, no sheens today. We check out two abandoned vessels towed from the north, purged of fuel, and moored at the Terminal, “it’s a lot easier to deal with these before they sink,” notes Dave. 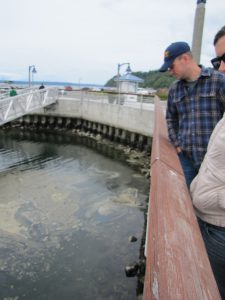 On the way down south to check out a previous cleanup site, we turn around to respond to a diesel spill in Elliott Bay Marina. When we arrive, oil-absorbent boom and pads have already been deployed and have picked up some product (which appears on the material as a pinkish stain). “It’s all about a quick response,” advises Dave. If and when the next large-scale oil spill occurs, we’re now prepared to mount that quick response.