The West Maui Mountains between Kajakuloa and Makamakaole has historically been home to many breeding seabirds, but in recent years this population has been in steep decline. Habitat conservationists are hoping that next year they will begin to hear the songs of native seabird species in these hills again.

Two bird enclosures are in the process of being built by First Wind, a Boston-based renewable energy company that operates the Kaheawa wind farms above Maalaea. The enclosures are for the endangered Hawaiian Petrel (uau) and the Newell’s Shearwater (ao). First Wind agreed to put the conservation plan together in order to offset potential impacts of the wind farms and ensure a “long-term net conservation benefit”. 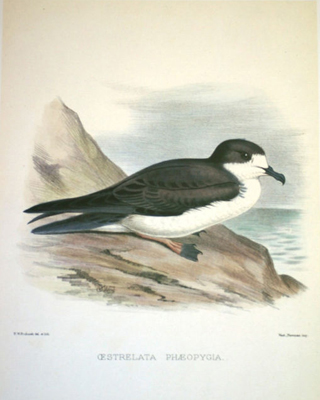 A Hawaiian Petrel, an endangered species that this project is hoping to help.

The already installed shearwater enclosure has a predator-proof fence around 3-4 acres of breeding habitat. Many predators were trapped and removed and the fences will be checked each week for any breaches in security. Additionally, artificial burrows will be placed in each enclosure. The second enclosure will be installed within the next couple of weeks, and both enclosures are to be fully completed by fall.

Why is there a need for these enclosures? Native seabirds were first driven to near extinction after early seafarers used the birds as food. More modern day threats mainly include introduced island predators. “We know that there are shearwaters here, but they’re being (preyed upon) by mongoose and cats,” said Steve Sawyer, president of EcoWorks New Zealand, which designed the enclosures for First Wind and has built similar enclosures on other Pacific islands.

Sawyer brought two specialists with seabird detecting dogs to help search for remnant Hawaiian petrel burrows. After weeks of hiking all over the mountain, the search team found only dead petrels.

Attempts will be made to draw in the seabirds through the use of a solar-powered, weatherproof sound system that broadcasts recorded bird calls as well as the use of life like-decoy birds that were made by the same New Zealand company that created props for “The Lord of the Rings” movies. The enclosures will be kept in place indefinitely and biologists will monitor the project for the next 20 years.

For more information and photos of the enclosures click here.