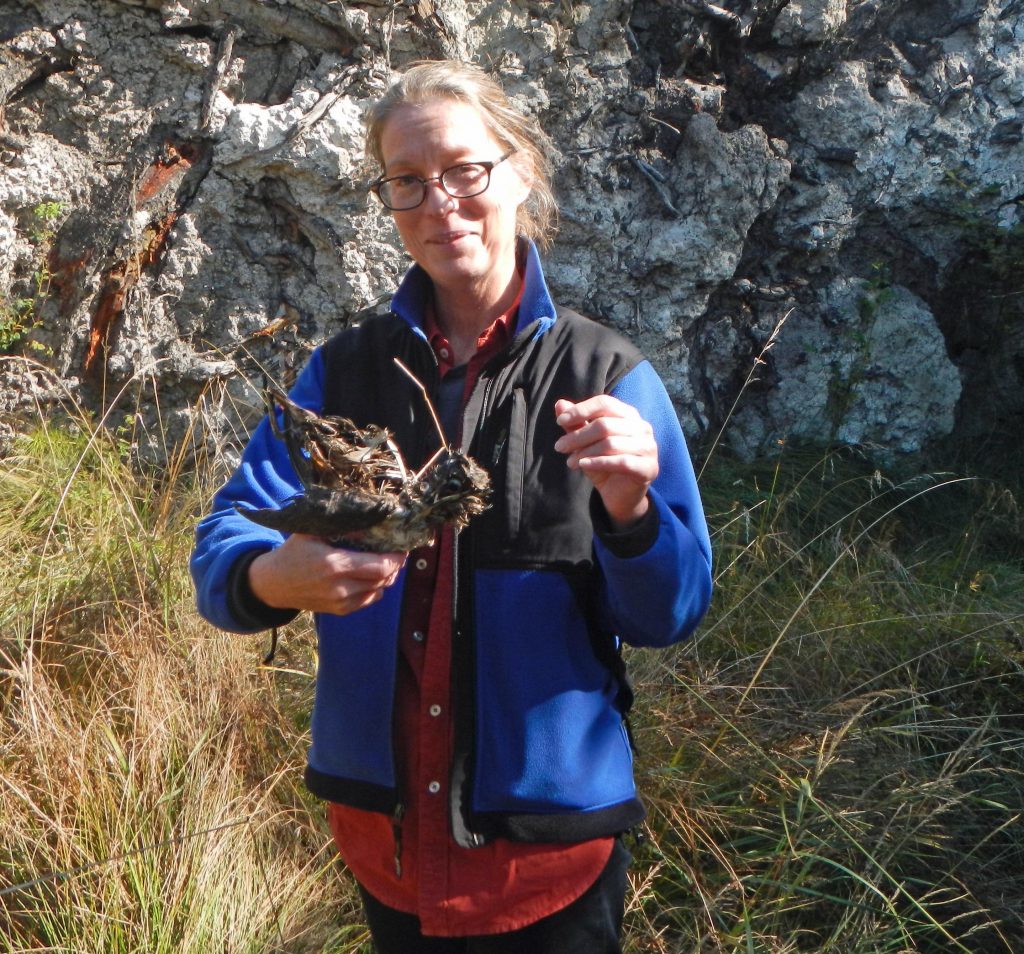 Last weekend, amidst a blaze of late summer sun and warmth, I had the privilege to deliver a talk at the Lopez Library as part of the National Public Lands Day celebration co-hosted by the San Juans National Monument on Lopez and Kwiaht, among others, on COASST findings.  Our bird verifier, Charlie Wright, made an appearance the next day at the “Beer and Birds” event in Lopez Village.  Between us, we had the island well-covered.

COASSTers throughout our geographic range can attest to upticks in beachcast carcasses over the last several years, from Cassin’s Auklets along the outer coast of the lower 48, to Common Murres in Alaska, to Rhinoceros Auklets in Puget Sound and the Strait of Juan de Fuca.  There is really something serious going on, what with marine heat waves (aka “The Blob”) and El Niño shifting the marine food-web out from under the birds.

The graph below shows the long-term average “baseline” – the black line that looks like a heartbeat signal – annually from 2001 through to present for the outer coast of northern California through Washington state.  The pale gray bars represent the actual monthly signal across the years.  When the gray bars soar above the heartbeat baseline, that’s a “mass mortality event”.  You can see two things right away:
1. the frequency of mass mortality events is increasing – the time between them is decreasing.
2. they are getting more severe.

COASST data have been essential in telling these stories – how many birds of which species are found where, and when.  Only the super-human efforts of many COASSTers, often toiling in adverse weather conditions, makes it possible to find out how far from normal things have become.  Then COASST staff and scientists leap into the next phase of working with our science and resource management colleagues to figure out what killed the birds.

For residents of the San Juan Islands, and other localities surrounding the eastern Strait of Juan de Fuca, this year’s big event has been untoward Rhinoceros Auklet mortality.  From Victoria to Orcas to Whidbey to Dungeness, Rhinos have been washing ashore.  COASST and all of our science partners have been closely following this event.  You can get the latest information here.  Saturday morning I went out with Lopez Island COASSTers Cathy and Daphne on a tour of some amazing and special sites along the southern headlands of that island.  A mix of National Monument, Park, and private land, these cliffs interspersed by pocket beaches offer a gorgeous view of the Olympics and Vancouver Island, and a beautiful late summer landscape of burnished grasses and wind-pruned Douglas firs.

This weekend we found exactly what COASSTers would predict – Rhinos!!  What was interesting was where we found them.  Rather than on the beach, all of the (many) carcasses we found were on the headlands overlooking the Strait of Juan de Fuca.  Large waves?  A better explanation was provided by Daphne and Cathy, who let me know that Bald Eagles regularly perched on the spots.  We had found a raptor “fast-food” restaurant littered with the well-plucked leavings of small Alcids.  How did we know they were Rhinos?  Of course, the telltale bill horn gave some carcasses away, as did the diagnostic pale stripe (looks like worn pipping on a well-loved couch) on the leading edge of the wing stretching from wrist to elbow. 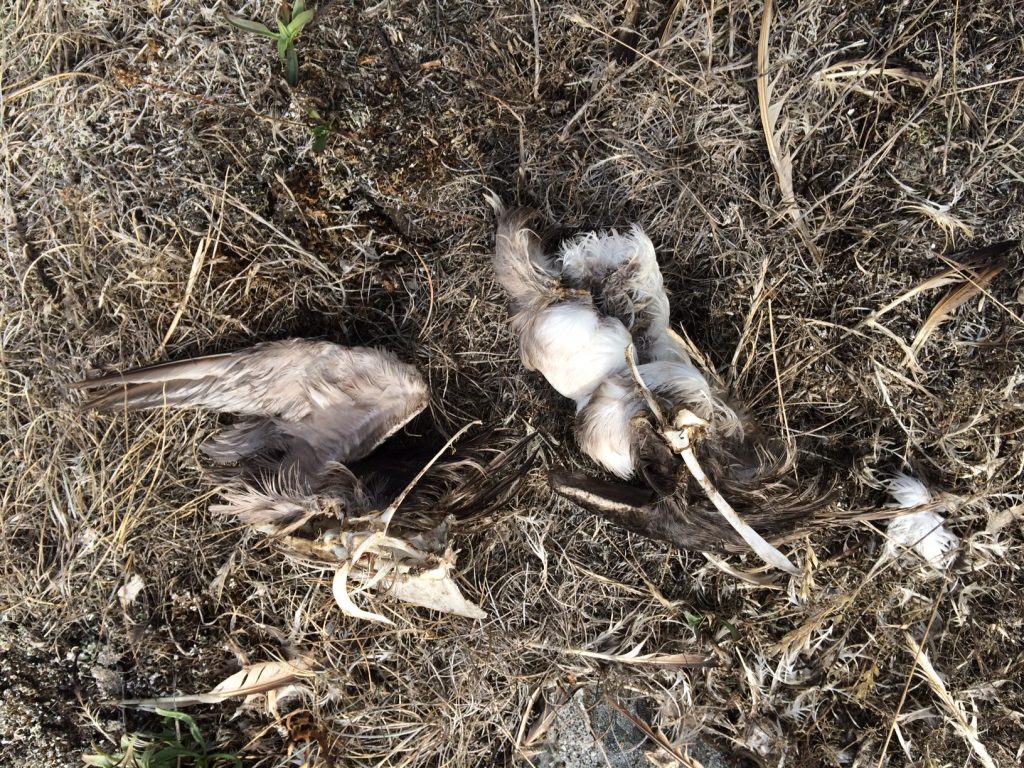 The diagnostic pale stripe is clearly visible along the edge of these two Rhino wings, which are from two different birds; which I discovered by looking carefully at the wingchord measurement and feather wear pattern. (Photo Credit: Julia Parrish) 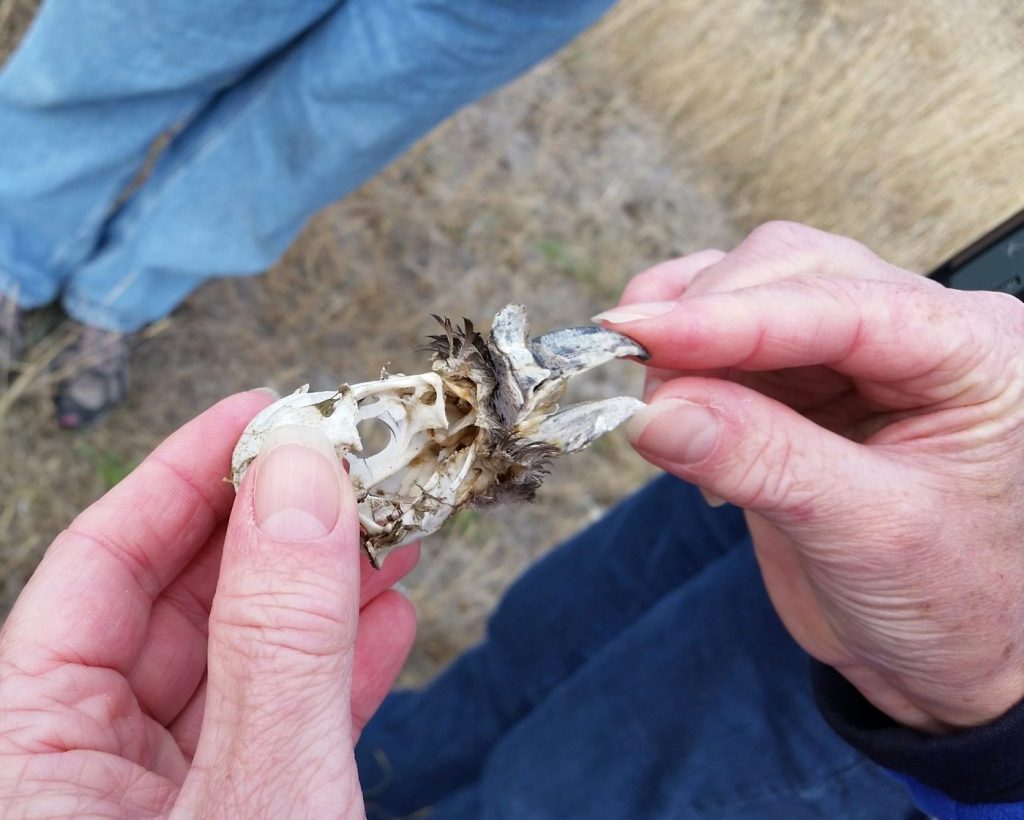 Although this bird is too-far gone to be a COASST bird (because the bill length can’t be accurately measured), it’s still easy to identify as a Rhinoceros Auklets by the prominent horn.  (Photo Credit: Cathleen J. Wilson)