Hope that all of you are enjoying sunny beach walks this month! It’s an exciting time at COASST.  Tomorrow, we are holding our first marine debris pilot training session in Ocean Shores, Washington, and last week we met up with COASSTers in Neah Bay, Washington for a refresher training on the beach. We’re also getting ready for upcoming trainings in California and Oregon next month. A big thank you to all of you for your hard work. If you have any datasheets or photos lying around, please send them our way! We can’t wait to see them.

Let’s take a look at what’s washed in recently:

Can we get to the species with just two wings? Sure!

Alaska wing key (page 44): A smidgeon of the upperwing is visible in the top photo– select “dark, some species w/ white spots or edging.” Upperwing dark (go to Q5). Underwing linings not white (go to Q9). Wing chord more than 35cm (go to Q14). Q14 asks us to check individual primaries: look at the bottom photo – the last primary is super short – must be a Bald Eagle.

West Coast wing key (page 33): A smidgeon of the upperwing is visible in the top photo– select “primarily dark, some species w/ pale spots of thing stripes (go to Q2).” Upperwing simple dark (go to Q3). Underwing is dark (go to Q6). Check the wing for smudges – nope. But the “outermost primary IS more than a feather width shorter than the next – a Bald Eagle. 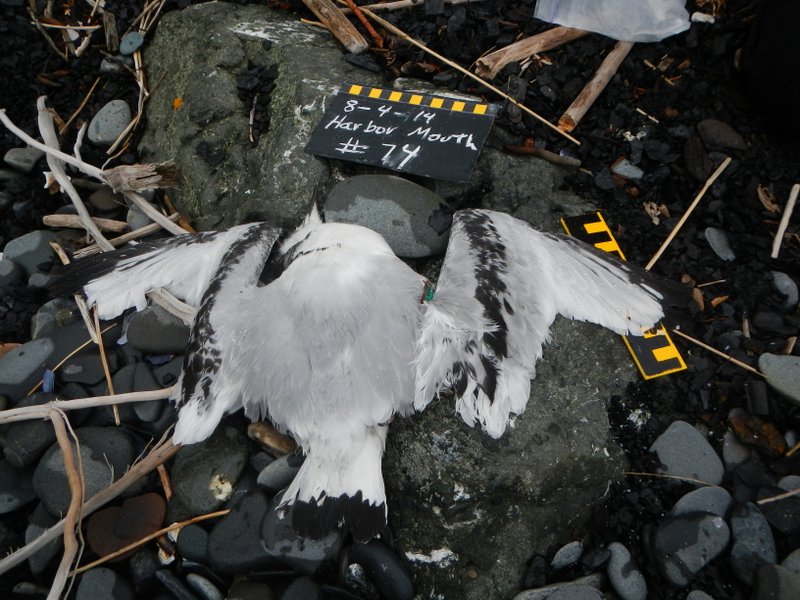 Since the foot is hidden, let’s use the wing – it’s unique!

Alaska wing key (page 44): On Q1, select “gray, some species w/ dark tips and/or dark stripe(s) on mantle (go to Q25). Aha! “Broken dark diagonal stripe from wrist to elbow (go to Q26). No idea about the underwing, so we’re left with BLKI-i (LA14) and BOGU-I (LA18). Note the immature Black-legged Kittiwake has white secondaries and the immatyue Bonaparte’s Gull has dark secondaries – this must be an immature BLKI – a young chick, not yet fully grown.

West Coast wing table (page 32): Wing is 21cm, so we should consider Med (21-24cm), one row up Small (18-20cm) and one row down, Med-Lg (25-28cm). Upperwing is mostly gray, so scan across to the next page where “Gray Mantle” appears as a column header. Yikes! Nothing in any of these size classes. Let’s take it down one more row, where we find BLKI (LA13) and RLKI (LA23). Between the two, the Black-legged kittiwake is the one with the paler mantle, black wing tips and black diagonal wing stripe. 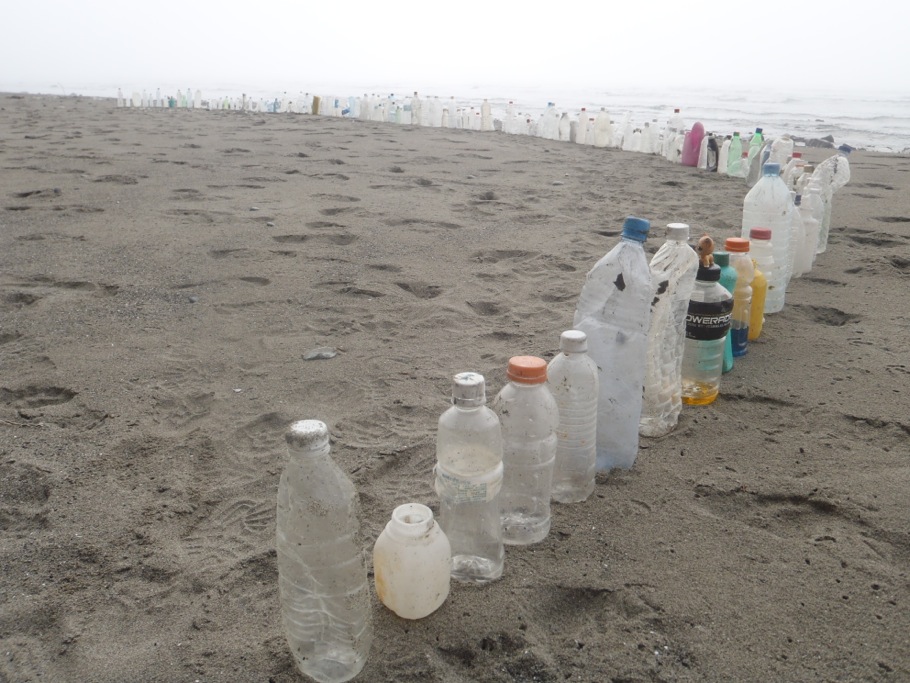 Is a bottle just a bottle and a cap just a cap? This photo taken by Kari on her August survey at Duk Point (WA) demonstrates the variety of shape, color, size, material and condition of what we might think of as “beverage bottles”. The variety matters: shapes are sometimes particular to country of origin and tell us how far and where a bottle may have come from.

Bottle caps that are in the red end of the color spectrum like this one, found by Janis and Judy on Ruby South Beach (WA) in April, are often confused for food by many seabird species.

Speaking of marine debris, thanks to Paul at Ocean Park South in Washington for helping us to identify the black piping featured in What’s Washed In on August 8.  These black tubes appear to be the remains of a net pen called a polar circle, which is used in salmon farming. 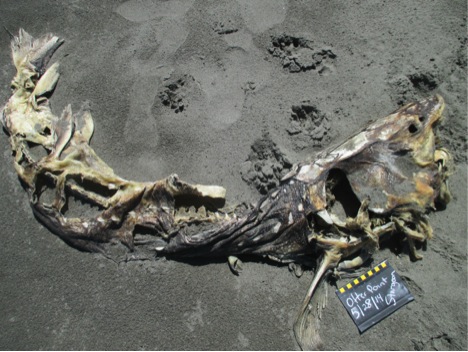 Not a bird, but quite an interesting carcass! Candace found this sturgeon at Otter Point on May 28. White sturgeons, also known as Pacific sturgeons, are found along the West Coast. Sturgeon are anadromous fish, meaning they start their lives in freshwater and then migrate to saltwater. Sturgeon may return to freshwater to spawn multiple times over their life. They can live up to 100 years, and they are also the largest freshwater species in North America, growing up to 20 feet in length!

August is off to a great start! We’ve had wonderful conversations with many of you this week during our summer check-ins, we are excited for a Beached Birds Refresher in Neah Bay on August 16, and we are getting ready for our very first Marine Debris Pilot Training in Ocean Shores on August 23! If you are looking for something to do this weekend, note that this is the last really good low tide series in daylight – a perfect time to conduct a sea star survey at a local rocky beach.  Check out the volunteer toolbox to find the COASST protocol and datasheets.

Thank you for all of your hard work this month! Let’s take at what’s washed in to COASST beaches recently: 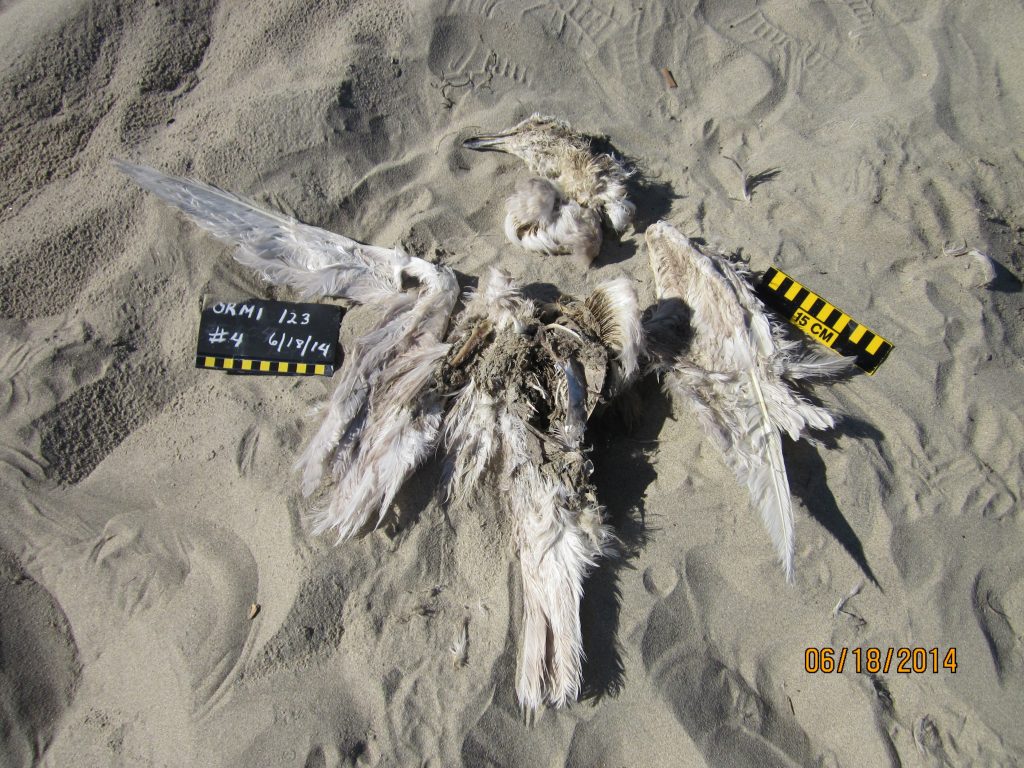 Carol found this bird at Bastendorff Beach in Oregon on June 18th.
Bill: 63 mm, Wing: 40 cm, but no feet on this one – let’s jump to one of these three places:

West Coast wing table:
Scan down to the “extra large” row and across the column headers. Of all these, mantle is tan + white. If you chose gray, that’s okay, but just gray leads us to Heermann’s Gull (LA21) and that mantle is way too dark. So we’re left with: Large Immature Gull – LIGU (LA3), South Polar Skua – SPSK (LA29), Pomarine Jaeger – POJA (LA27), Heermann’s Gull HEEGj (LA21). The SPSK has a very dark wing with white at the bases of the primaries – it’s out. POJA has bright white primary shafts that contrast with the upperwing color – it’s out. We’ve already eliminated the HEEG. We’re left with LIGU, specifically a very bleached/worn Glaucous-winged Gull (you can separate it from the Glaucous Gull – bill all black).

West Coast wing key:
Choose “mantle with variable mottling: brown, gray, or white” (go to Q14). White/brown is mixed throughout (go to Q15). Underwing linings (those small feathers covering the bases of the primaries and secondaries on the underside) are not bright white – they’re tan. Still, even if we can’t really decide, we’re left with: CATEj (LA19), SNGOj, LIGU (LA3), CAGO (WF1) or GWFG. Let’s use bill to get there – CATE has a straight, red bill. All the geese have bills with rounded tips and serrated edges. Must be a LIGU!

Alaska wing key:
If you choose white-to-nearly-white you’re a bit out-of-range at 40cm. Instead select “mottled mantle brown, gray or white” (go to Q29). Mottling throughout mantle (go to Q30). Underwing pattern is not white, and at 40cm it’s either an eider, Large Immature Gull or Emperor Goose. Bill gives it away – LIGU indeed. 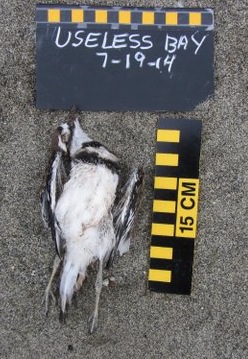 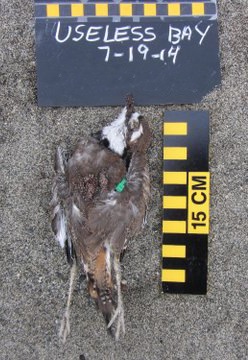 This new COASST species was found by Candace on Useless Bay in the Puget Sound on July 19th. It’s not in the guide, but we can get to family with the foot!

On SB1 of the COASST guide, Sanderling, Black Oystercatcher and most plovers fall into this foot type. Two other plovers turn up as similar species to this one in Paulson’s “Shorebirds of North America” – Semipalmated Plover and Wilson’s Plover, but only the Killdeer has two black stripes across the upper breast. 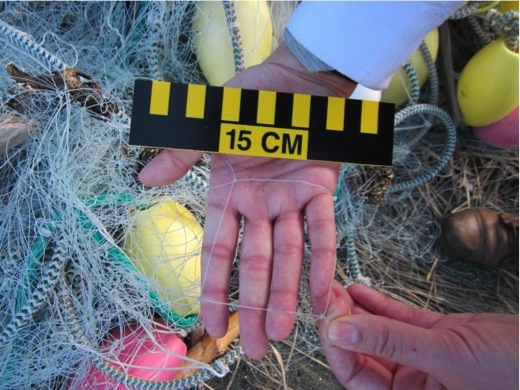 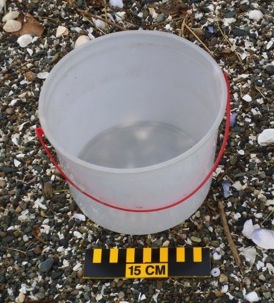 What is it about nets that helps them catch fish and other organisms? Loops, as Jane demonstrates here, can entangle an animal – allow it to get “in,” but making it difficult to get “out”. Sometimes nets get lost in the ocean and continue “ghost fishing”. The size and flexibility of the loops determine what animals might get caught. Fishing nets were made for this purpose but there are lots of other common debris objects that also have loops that can entrap animals like this bucket found by Arne on Bainbridge Island (WA). 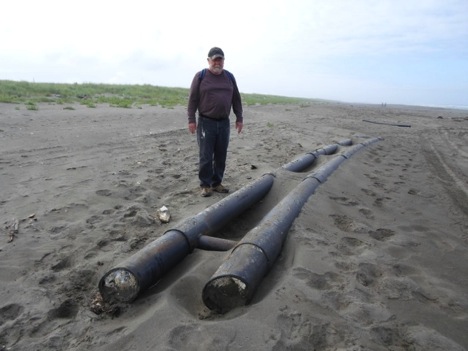 Barbara and Mike found this large pipe had at South Butter Clam (WA) on July 23rd. We are still trying to figure out what it is and where it may have come from. It’s over 30 feet long and filled with Styrofoam. Best guesses so far: the base of a floating dock, raft or pontoon boat. Let us know if you have other ideas! 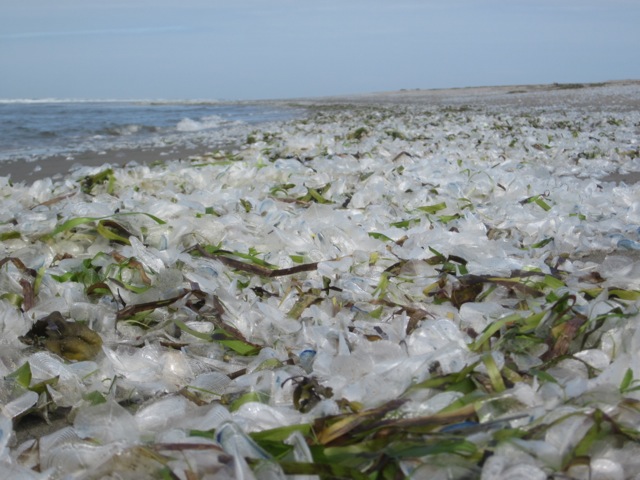 Have you noticed these creatures on your beach lately? Here’s a photo from Stanley at Washway Beach (WA), who noticed a large accumulation of Velella velella at the end of June. These creatures are commonly referred to as “by-the-wind sailors.” Because these colonial cnidarians have no means of movement, they solely depend on prevailing winds and ocean currents. They actually use their semicircular “sail” to catch the wind. When the ocean and wind conditions come together just right, we see a mass stranding of Velella velella: an event that only seems to occur once every four to five years!  While Velella velella do in fact sting their prey when in the water, they are found to be harmless to humans.