All quiet on the western front? Lower 48 Outer COASSTers, and our data verifier Charlie Wright, have – after breathing a huge sigh of relief! – been reporting that it’s been a little too quiet this winter. In fact, COASST surveys from November 2016 to February 2017 from Washington down to California recorded the lowest encounter rates of beached birds we’ve seen since we started!

The “heartbeat” graphs below show the long-term (starting in 2001 for WA and OR; 2006 for CA) baseline (solid black line) and a measure of variability around it (yellow wash). The gray bars are the average monthly values for that region of the coastline. We’ve rolled up the COASST data by state, so realize that there are a lot of beaches represented by each bar. 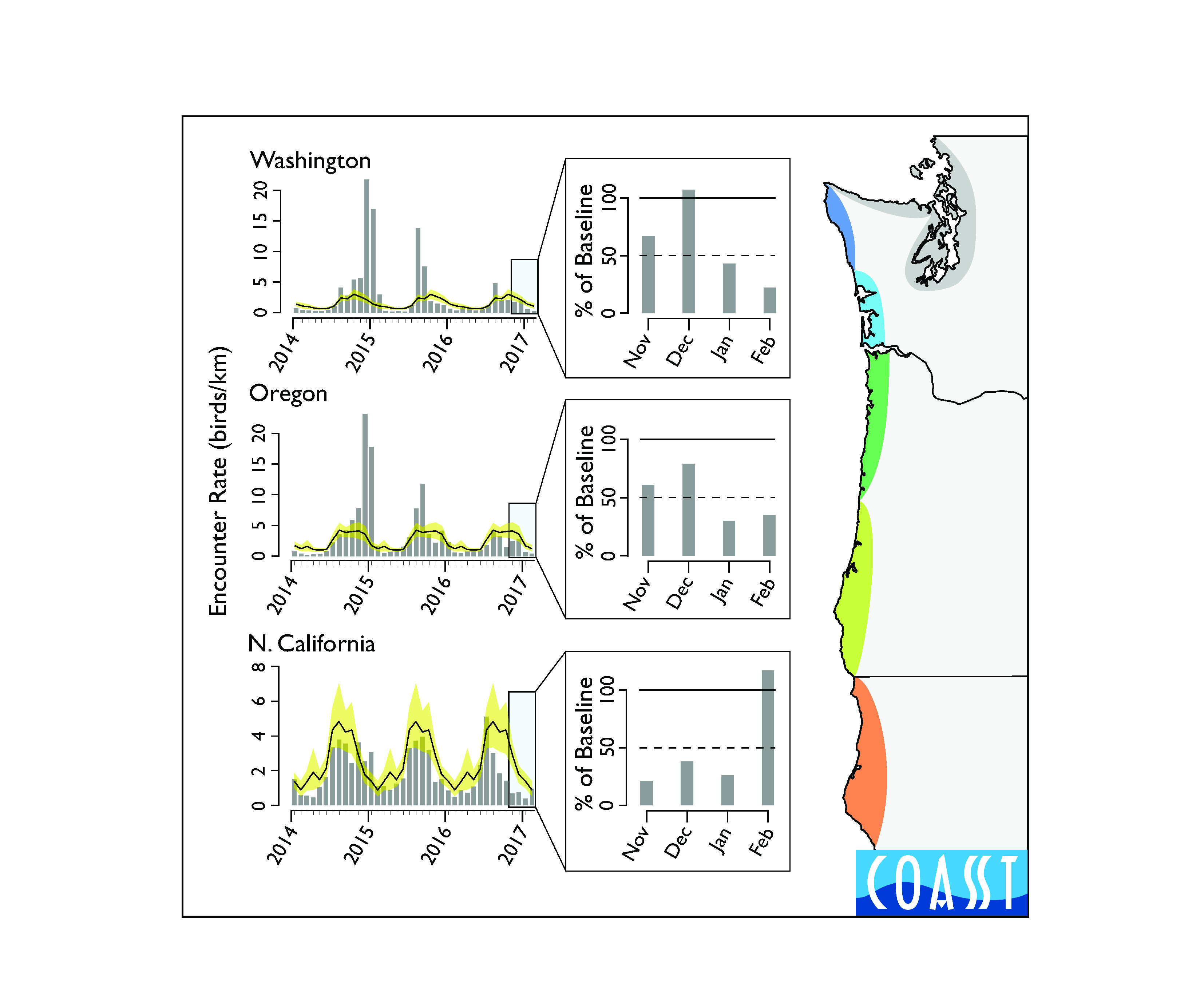 But check out what’s been happening most recently. We’ve expanded the last four months and displayed them as a percent of the baseline. Only December in Washington and February in California reach ~100%. All other region-month combinations are at less than half of the number of birds we would expect over the same period. Of course, compared to the death and destruction of recent winters along the outer coast, too few birds doesn’t ring alarm bells. But we have been wondering, who is missing? 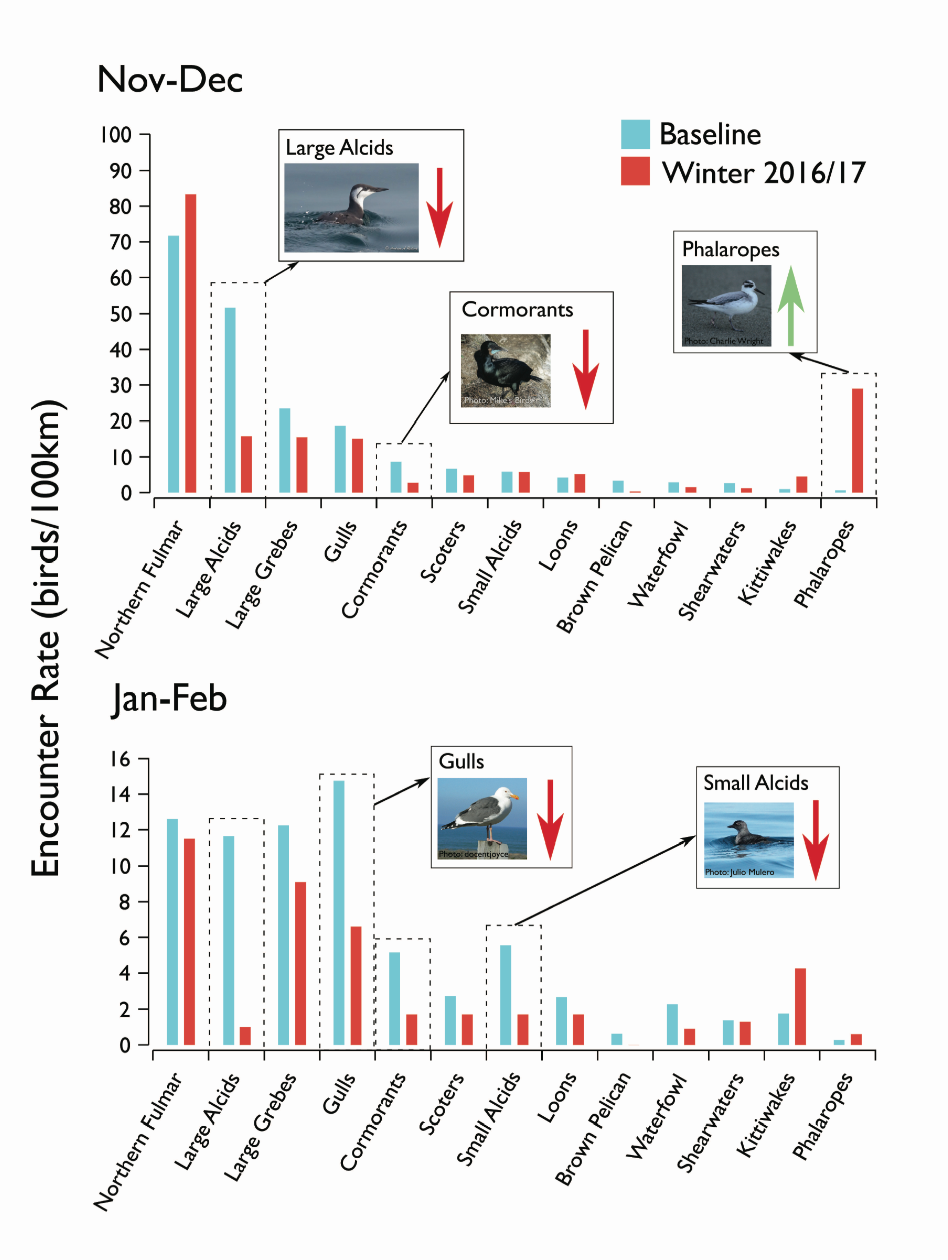 The bar graph indicates the number of carcasses, by species or group, in a 100 kilometer stretch across the entire lower-48 outer coast. The blue bars are the baseline encounter rate, (statistical geeks take note: calculated as the median across years from 2006 on so that WA, OR and CA are equally weighted). No surprise – fulmars, murres (within the large Alcids), large grebes (mostly Western Grebes) and gulls make up the vast majority of the “usuals.”

The red bars are what is happening this winter, from Nov-Dec 2016 in the top panel, to Jan-Feb 2017 in the bottom panel. With some exceptions (check out Northern Fulmars, phalaropes in November-December and kittiwakes in January-February), most groups are drifting in at lower rates. We’ve boxed “top 5” contributors that have dropped this year by more than half. Large Alcids – mainly murres – were much less abundant than usual, with rates ten times below normal for January-February. Rates for gulls, cormorants and small Alcids (primarily Cassin’s Auklets) were also much lower than normal.

Both large and small Alcids have been having a rough time recently, with significant mortality events effecting Cassin’s Auklets in the winter of 2014-15, Common Murres in the winter of 2015-16 and Rhinoceros Auklets in the summer/fall of 2016. In fact, this is the first winter in three years that lower 48 outer coast COASSTers haven’t responded to a major die-off event.

Where post-breeding birds disperse to is an important factor in determining whether and how many will end up on shore. Should they die in a winter storm, birds that have taken up their wintering residence far offshore have little chance of floating to the beach before they sink or are scavenged at-sea. This is usually the case with Cassin’s Auklets, as geolocation tagged birds have ranged throughout the eastern half of the North Pacific in winter. Undoubtedly, some of the birds are simply way out there.

But the simplest explanation is that fewer birds are dying. Across the board declines in the rate at which COASSTers are encountering carcasses is usually indicative of milder conditions, and/or plentiful food. The winter storm conditions were fairly average compared to the long-term average, and with ocean temperatures approaching near-normal levels off of the whole of the west coast by late 2016, conditions may finally be returning to some level of normalcy.

Should we be worried about the lack of dead birds on beaches? With the tumultuous last several years, COASST has come to expect a “new normal.” Whether that now includes a return to the “wreck years” is an open question. In the meantime, COASSTers should relax into their next survey and enjoy the respite!