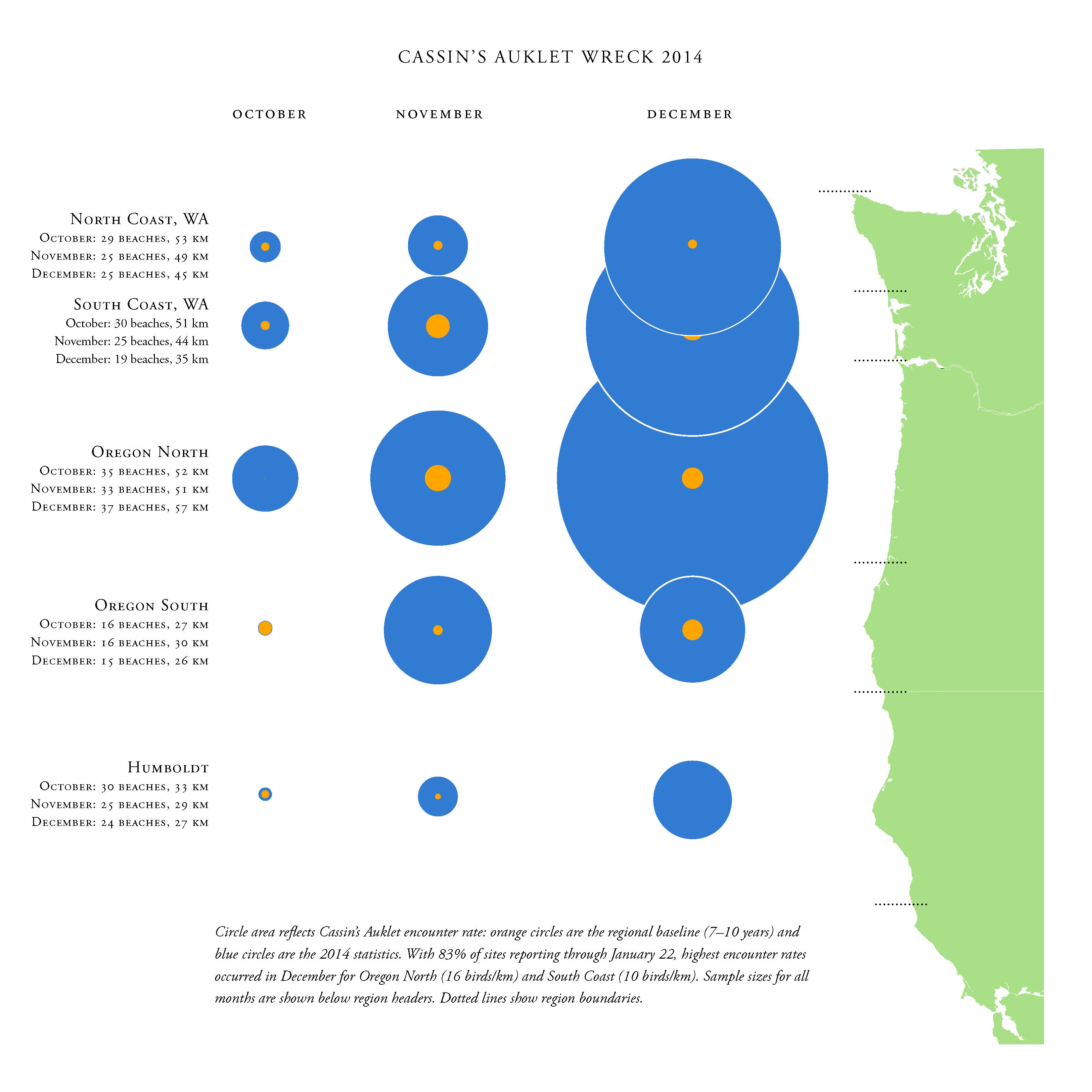 We’ve updated the Cassin’s Auklet graphic to include December’s monthly encounter rate, with surveys received through Jan 22, 2015. A few more weeks into February and we’ll be able to add January as well. Currently, January totals are the highest of the four months, but that may change as the number of entered and verified surveys grows.

We figured COASSTers would want to check out this photo (which Charlie rounded up from Tom). Did you note the COASST ID characters on this one?

Woo hoo! That’s how we know it’s not a Kittlitz’s or Marbled Murrelet, nor a Rhinoceros or Parakeet Auklet. And this late into the year (Nov-Jun), juvenile murres are all teenagers – at least the same size as adults – so it’s not one of those, either.

Keep on going, COASSTers! At this rate, Cassin’s Auklets might surpass Northern Fulmars for the number two spot on the COASST species list – if so, you’ll be the first to know!

Following the Dec 20/21 weekend, COASST participants have seen a wave of Cassin’s Auklets hit the beaches, from Clallam County, Washington to Humboldt County, California. Combining reports from beached bird programs across North Pacific (see previous blog) preliminary estimates suggest that tens of thousands of these birds are washing ashore, at the rate of 10-100 times “normal.” 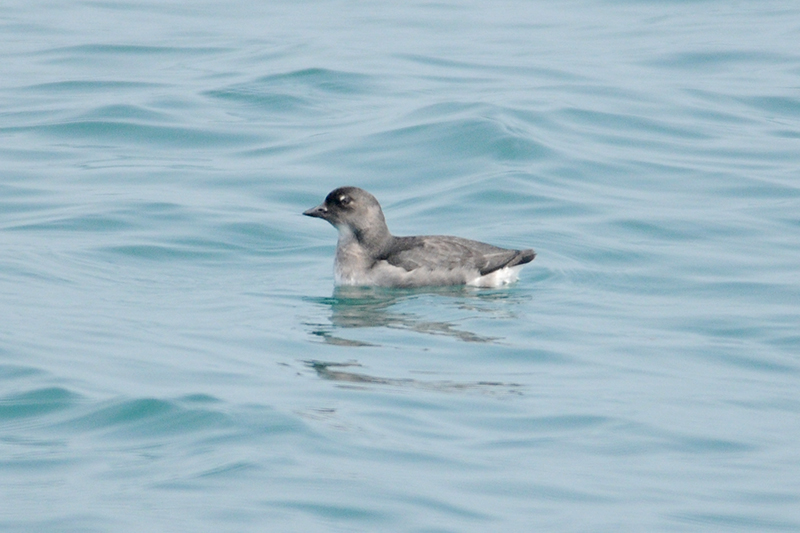 The Cassin’s Auklet, Ptychoramphus aleuticus is a small (about 200g, or 7 oz) krill and larval fish-eating seabird that breeds along the West Coast of North America from Alaska south to Baja California, Mexico. A majority of birds ( ~80% of the world’s population) breed in the Scott Island group, off the Northwest tip of Vancouver Island. Need more info? Check out BC’s Coast Region Species of Conservation Concern Fact Sheet. 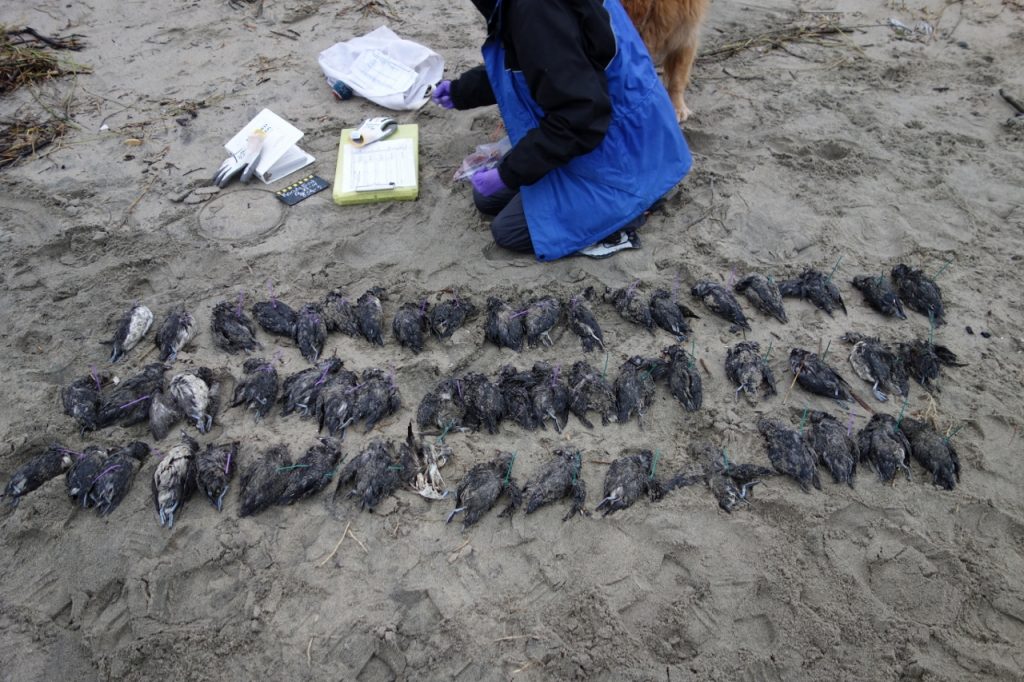 Over 50 birds documented by a COASST team outside of Lincoln City, OR. (c) COASST 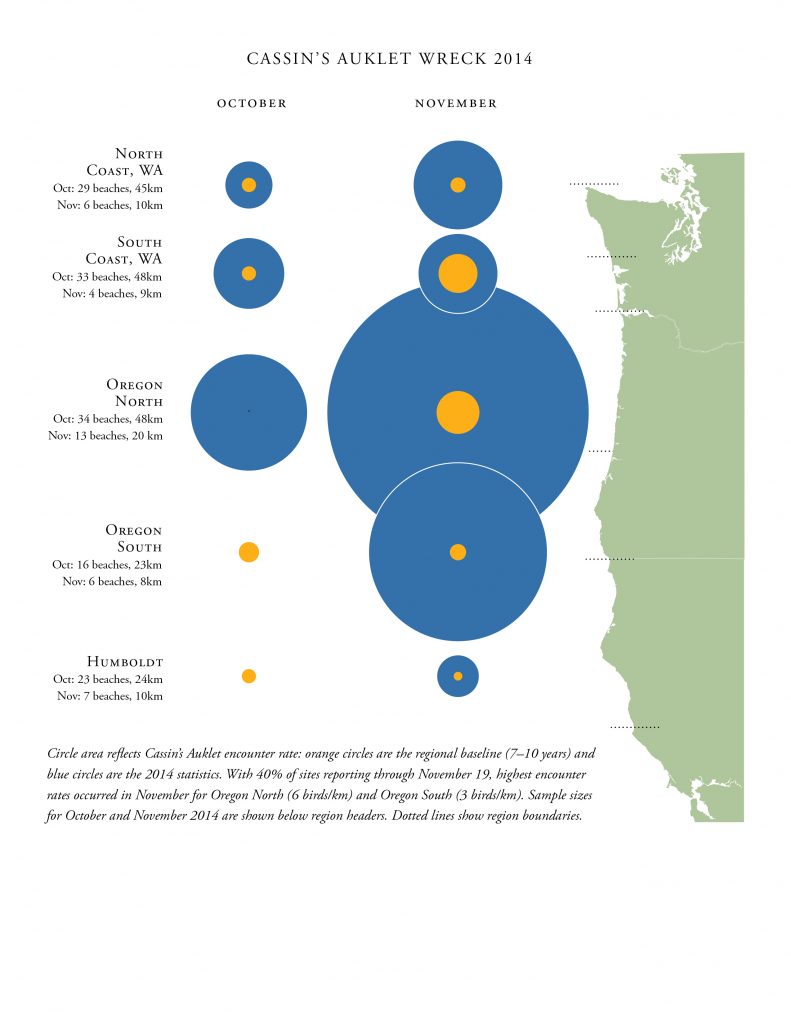 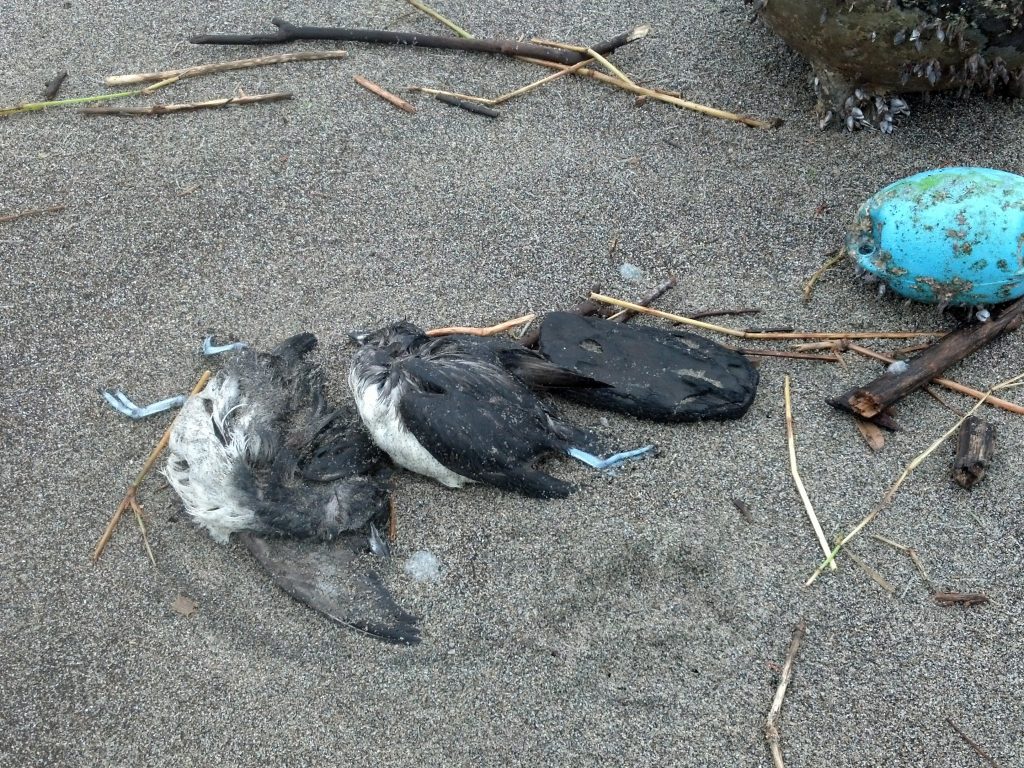 Just two of the 179 birds Patty counted on December 23 near Neskowin, OR.

It’s been a busy week at the COASST office, with juvenile common murre wreck reports in two Humboldt locations and lots of data coming in! If you happen to see 10 or more beached birds of the same species on your survey, check out Part 4 of the COASST Protocol and let us know if you have any questions about wrecks! We’re happy to help.

This weekend we have another low tide series, which means it’s a great time to head out for another sea star survey or your very first, if you haven’t tried the sea star protocol yet. More than 18 species of sea stars in the Pacific Northwest are exhibiting signs of Sea Star Wasting Disease, and we could really use your help to monitor sea stars on COASST beaches. Thank you again to those of you who have contributed thus far.  There is no way we could monitor such a large geographic area without your help.

We’ve had quite a few interesting finds on COASST beaches recently, including what we call a one-in-a-million bird! What does that mean? Let’s take a look at what’s washed in and find out! 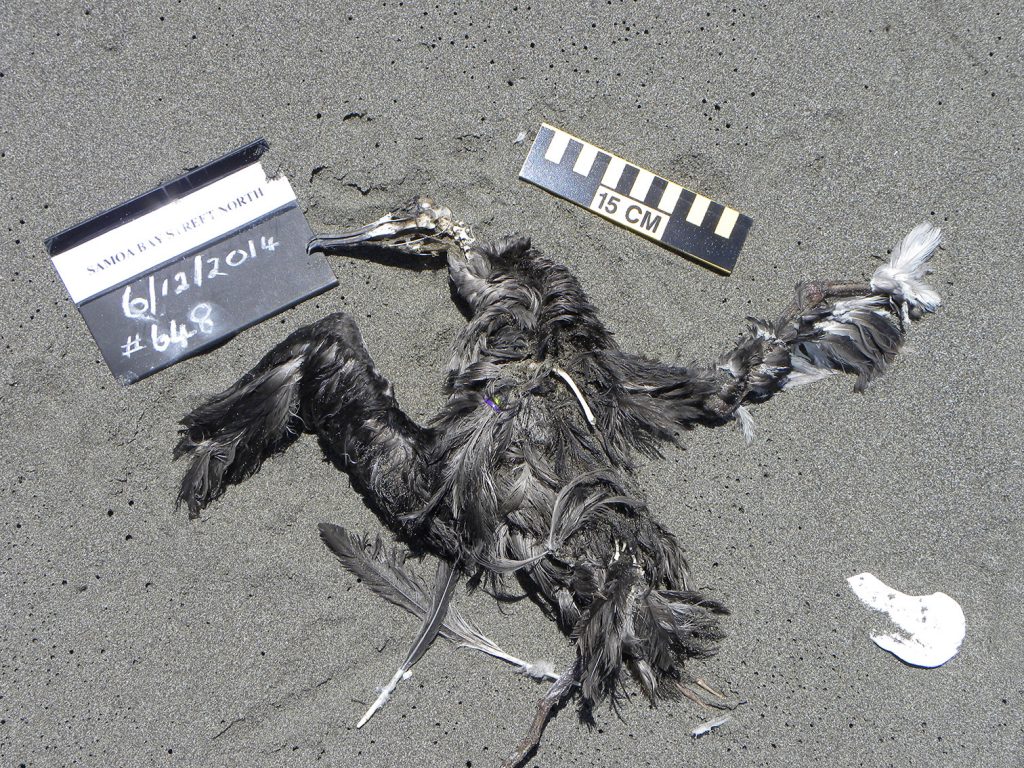 We haven’t seen a flood of this species hit the beaches like what we saw in the summer of 2011 and 2012. Still, Brenda and Bill spotted one – only measurable part left is the tarsus. Let’s take a look, starting with the foot key (tarsus = 53mm): Webbed, go to Q2; completely webbed, go to Q3; 3-webbed, 4th minute (=tiny) go to Q6; thin toe or nail only go to Q7; heel is flat, go to Q8; with this tarsus, we’re at Tubenose: petrels – stop!

On TN1, we can see that what’s left of the wings is larger than 20cm, so proceed to True Petrels. Bill is thin, long and dark – one of the shearwaters! With a 53mm tarsus, we’re outside the range of the Short-tailed Shearwater, and just barely in the range of the Pink-footed Shearwater. The PFSH has a pale bill base – well, Sooty Shearwater it is! 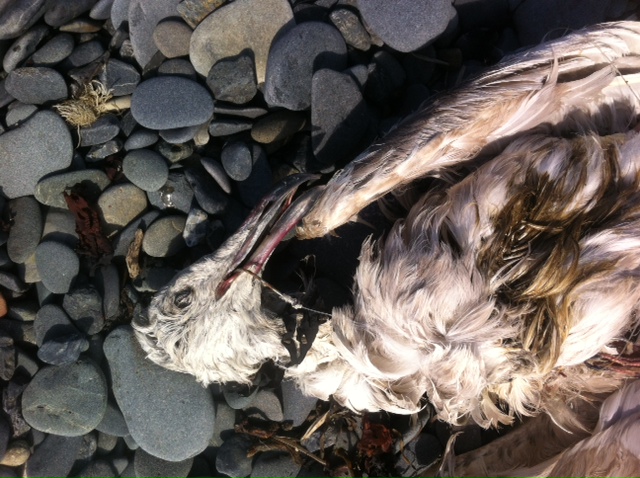 BJ and John found a one-in-a-million bird last week, not by species (we’ll get to that) – it was oiled AND entangled – only about a  .002% chance of that! Let’s get back to what it is – crack open the foot key again: Webbed, go to Q2; completely webbed, go to Q3; 3-webbed, 4th minute (=tiny) go to Q6; thin toe or nail only go to Q7; but this time the heel is swollen: Larids – stop! Hooked bill, mottled brown plumage, dark bill: we have ourselves a Large Immature Gull, specifically a Glaucous-winged Gull, subadult. 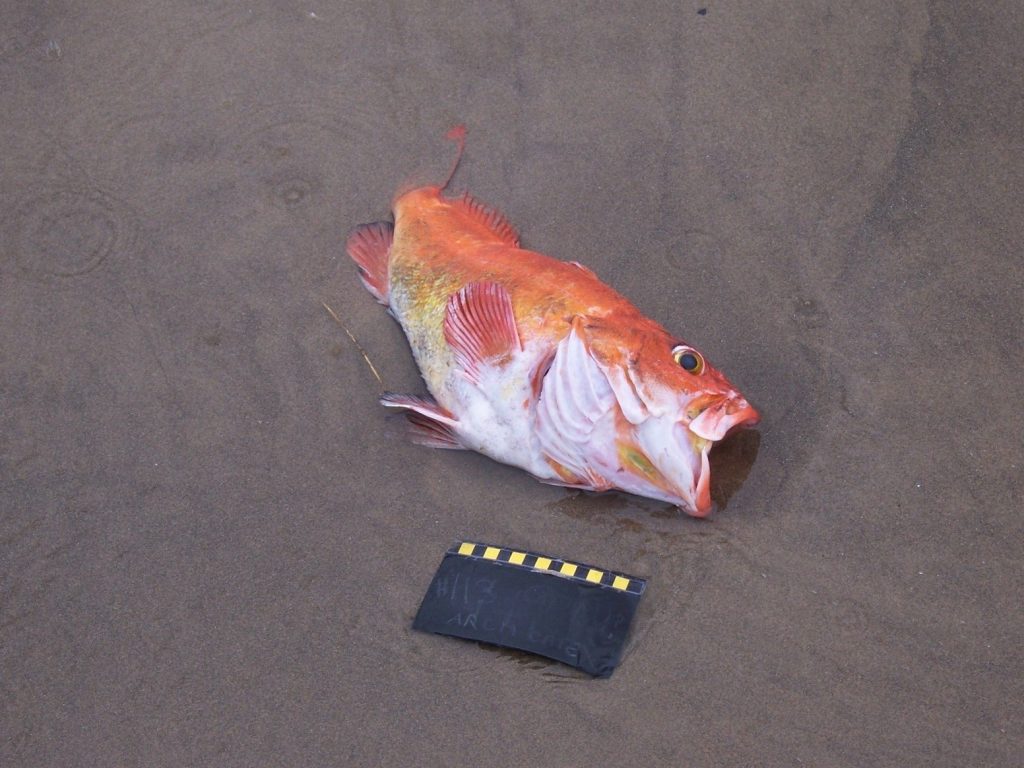 Look at the size of that fish! Joanna didn’t find any birds on her Oregon Mile 309 survey, but she did spot this Yelloweye Rockfish (aka Rasphead, Red Snapper) on May 25. Yelloweye range from Prince William Sound, Alaska to Baja California, Mexico, though in the middle of their range, their population is low and declining, which led to a ban on their take in Washington since 2003. In 2010, they were listed as Threatened under the Endangered Species Act prompting a proposal of critical habitat in the greater Puget Sound/Georgia Basin in 2013 for Yelloweye, and two other species: Canary Rockfish, and Bocaccio. Yellow eyed rock fish can grow up to three feet in length. Yelloweye rock fish are red in color as juveniles and very slowly progress to a dull yellow. By very slowly, I really mean very slowly! These fish can live up to about 120 years! 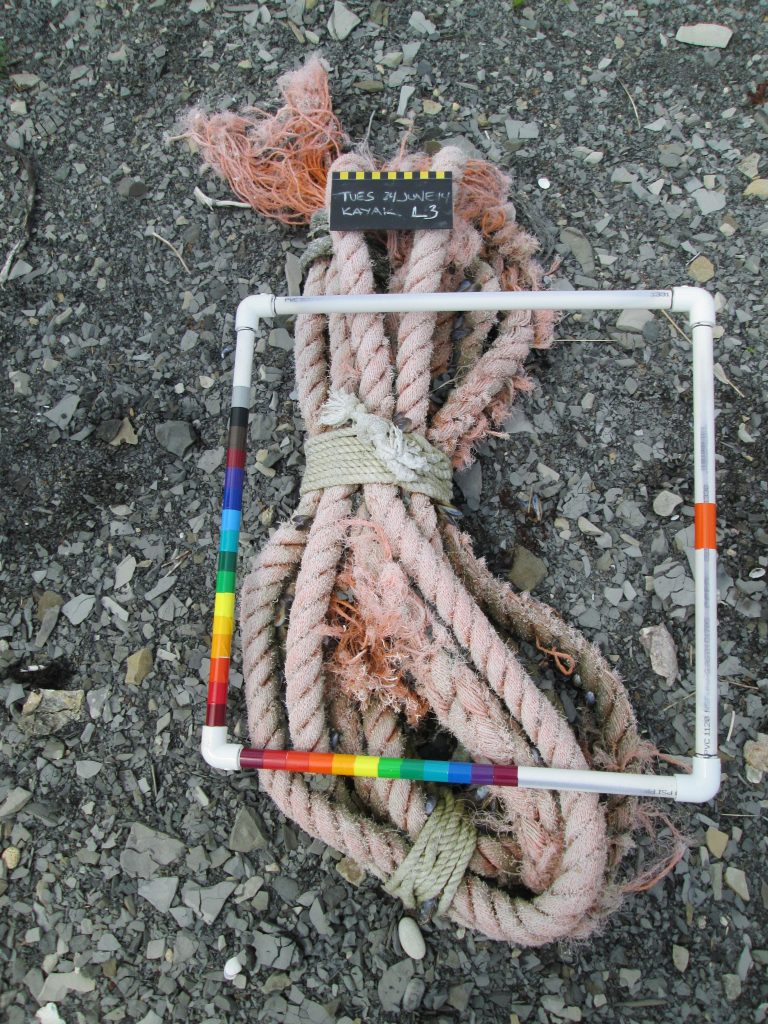 Wondering what’s happening with marine debris? COASST’s Executive Director, Julia Parrish, recently took a trip to Kayak Island, Alaska to test out the marine debris protocol.  She was joined by Ellen Lance, Branch Chief for the Anchorage USFWS Endangered Species Program, and they found a lot of BIG debris. On the smaller side was this rope. A couple of key characteristics are the fact that it has many loops (a potential entanglement hazard for wildlife) and it has gooseneck barnacles on it (a sign that it has been in the water a long time and may have traveled a long distance).  In this photo you can see our prototype measuring device/color bars used to determine the size and color of debris objects, along with the familiar COASST ruler and chalkboard.

Thanks to all of you for your hard work! Happy COASSTing!

Over in England, dead birds are washing ashore in large numbers on beaches in Devon and Cornwall for the second time this year.  The birds, mostly guillemots (i.e., murres), but with a smattering of gannets, razorbills, and cormorants, are coated with a white, gluelike substance.  So far there have been an estimated 200 birds affected by this substance since last week, with more suspected to wash up as prevailing winds and currents drive the carcasses to shore.

The Royal Society for the Protection of Birds (RSPB) has been taking in birds found coated in the substance that are still alive and using toothbrushes, “washing-up liquid,” and margarine to try and clean them.  So far they have rescued 95 birds, but 25 have died as of Monday.

This kind of thing is tragic for both the birds and for the human population in the affected areas.  Besides the emotional trauma of finding dozens of dead birds, there are economic implications for those areas where tourism is a large part of the economy.

Unfortunately, this is not the first time this year a weird sticky substance has been found coating dead birds.  In February, an estimated 300 shorebirds were found covered in what is believed to be the same substance.  Tests run during the February incident determined that the sticky stuff was polyisobutene, a relatively common chemical aboard ships.  Although testing is still in progress, it seems likely that this is the same thing.

More information from the BBC can be found here.

In early April, an alarming number of dead birds washed up on the east coast of the UK – a large majority of the birds were puffins. It is the worst “wreck” of birds for over 50 years. Researchers have speculated that the event was caused by recent extreme weather. There have been no signs of pollution in the regions in which they were found. It is thought that the birds expended more energy on staying alive in the recent North Sea storms, making feeding impossible. To makes matters worse, the success of the breeding season for many of these birds (which is quickly approaching) could be impacted from this event. The majority of the deaths have already surfaced, but the Royal Society for the Protection of Birds, alongside volunteers, will proceed to monitor said beaches in the upcoming spring and summer months. 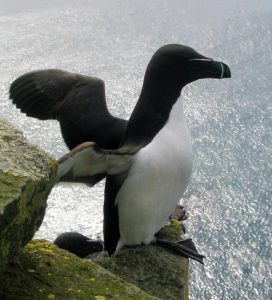 Check out some recent and intriguing alcid mortality events documented by SEANET, the Seabird Ecological Assessment Network. In case you didn’t know, SEANET is a citizen science project that conducts beached bird surveys on the east coast of the United States.

Since December of 2012, SEANET has documented an unusually high number of dead Razorbills, almost 30 as opposed to the usual 3-5 reported dead. The Razorbills, which are usually found in the Northeastern coasts have been recovered in areas as far as North Carolina and Florida.

Another strange incident observed by SEANET is the high Atlantic Puffin sightings, both dead and alive, in the Cape Cod area. Considering reports of Atlantic Puffins are rare, this high number of reports is being linked with the antecedent storm that occurred in the area. SEANET is currently watching for further effects of the storm on the puffins.

Finally, increased mortality of Dovekies in the Long Island area has been observed. SEANET has not documented abnormal mortality rates elsewhere.

In December of 2012 a bird wreck was reported along the coast of New York. The unlucky species was the dovekie, also known as the little auk. Beached dovekies were reported along the shore, in parking lots, fields and even yards. Wildlife rehabilitation centers as well as local veterinarians reported admitting record numbers of dovekies that had injuries ranging from neurological dysfunction to severe trauma. Unfortunately aquatic birds are difficult to rehabilitate as they require special housing, feeding and handling due to their adaptations for life at sea instead of on land. Of the 22 injured dovekies one wildlife rehabilitation center sheltered, only one survived to be released back into the wild.

In an effort to better understand the origin of massive bird wrecks such as this, wildlife health specialists advise recording all conditions present at the time of a wreck so that these observations can be used to better understand and predict future wrecks. One way that you can get involved in monitoring the health of your local environment is by volunteering with a wildlife health monitoring network, such as WHER. WHER stands for “Wildlife Health Event Reporter” and is an online application that allows you to report observations of questionable wildlife health in your area. For more information visit their website at http://www.wher.org.

For more articles and pictures concerning the December 2012 dovekie wreck see links below!