By now, you’ve likely heard the news of the startlingly high number of Common Murres washing ashore in Prince William Sound and beyond, as well as the reports of murres flying inland to the Mat-Su and elsewhere.  In fact, many of you have been out there on affected beaches in Homer, Seward and elsewhere counting the bodies and collecting our baseline data.  Thank you for those efforts, and particularly during the dead of winter.

We don’t know at this point why the murres are coming inshore, and why they are so stressed.  It is obvious that the huge die-offs reported after New Year’s day were exacerbated by a large storm that no doubt pushed many a bird past it’s limit, and definitely pushed all floating material up onto the beaches especially in long fjords (think Seward and Whittier).  There are many folks working on this story, including state, federal and tribal agencies, university scientists and others.  In fact, as we type this, many of those scientists are gathering in Anchorage at the Alaska Marine Science Symposium, where several talks will center on the murre story.

Each and every one of you should know that the COASST data in AK forms the baseline against which these elevated counted can be (and are being!) measured.  It is the data you and others before you patiently collected year in and year out that tells us exactly how many murres should normally be washing ashore (precious few!). Thank you!

Here is the latest infographic, showing the anecdotal reports that we’ve put together. 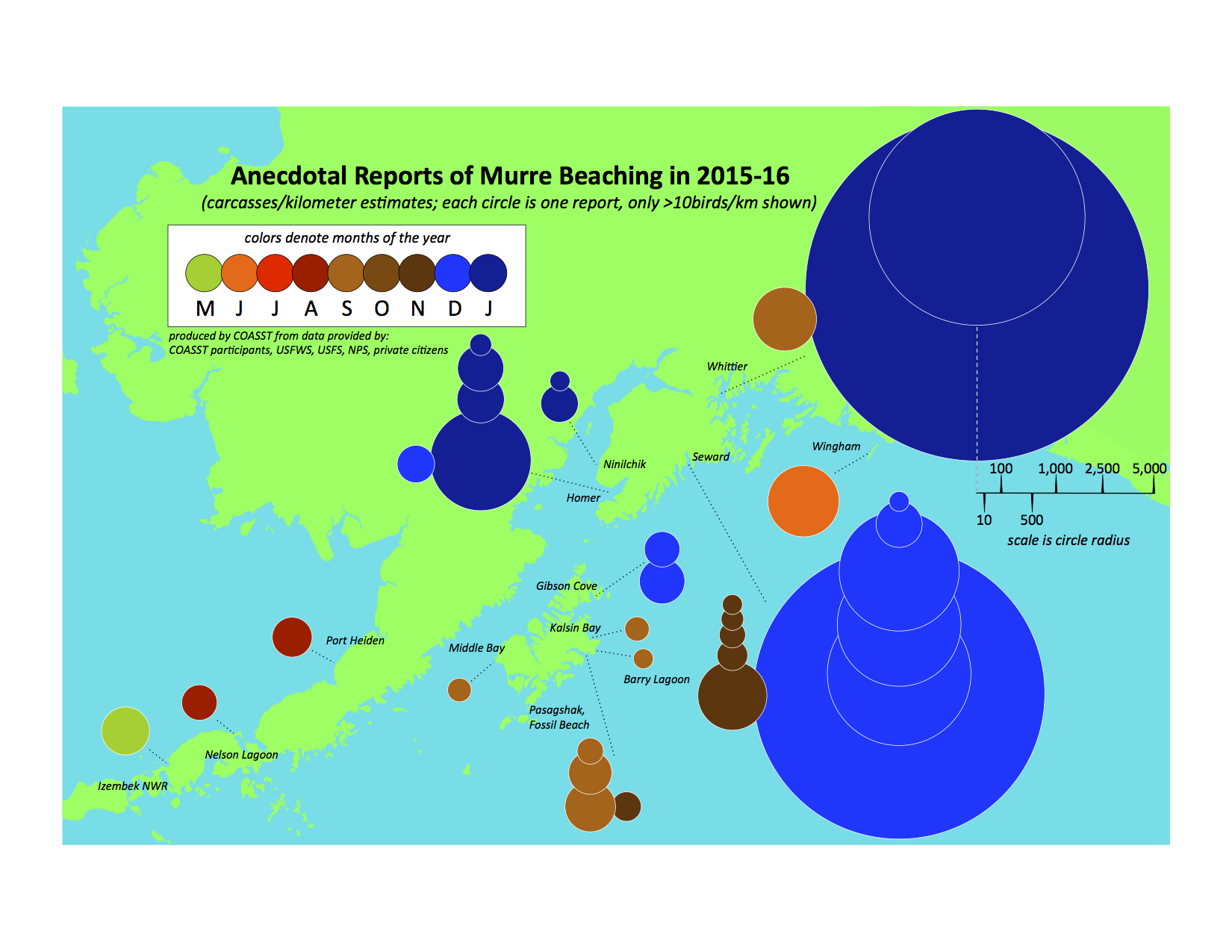 Goodbye 2015! You were a strange year for the North Pacific:  “the blob” stuck around, elevated numbers of Common Murres washed-in throughout the COASST range (and continue to in Alaska, see below),  harmful algal blooms, and lets not forget the Cassin’s Auklet wreck last winter. What does it all mean? COASST is working with partners up and down the coast to try to figure it out. We’re still assembling data from December, and January is in-progress, but here’s a look at the latest story that’s unfolding: 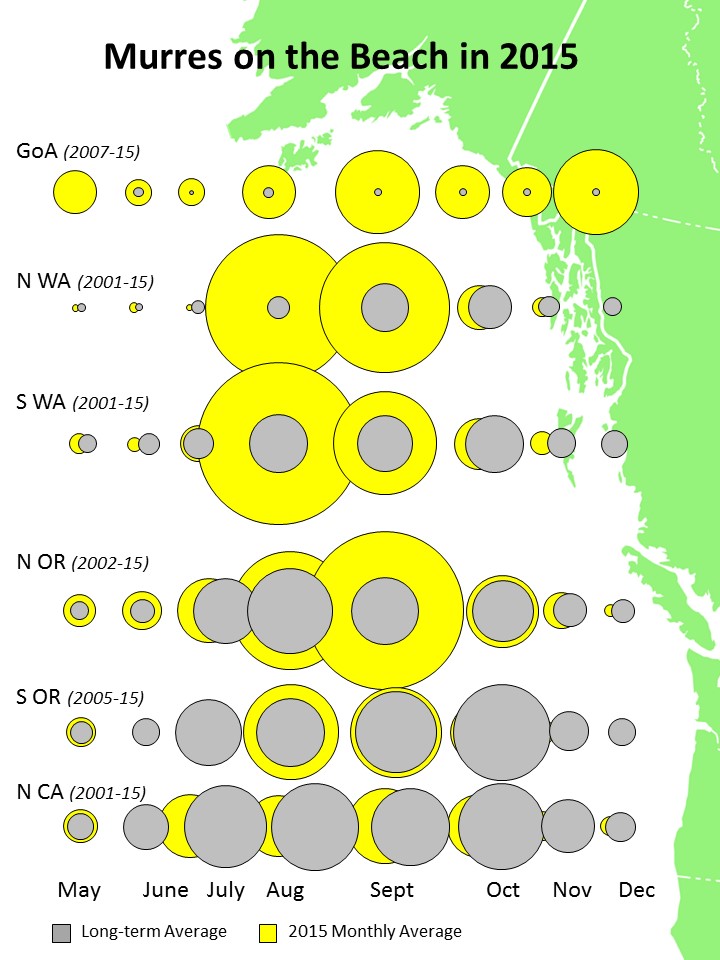 COASST data show that the annual murre post-breeding mortality signal (August-September) was observed in Alaska and the lower 48 in 2015, and was particularly accentuated along the outer coast of Washington and the northern coast of Oregon.

But in the Gulf of Alaska…

Elevated murre mortality levels occurred both before and after the breeding season, creating a continuous signal stretching from May through to present (December). 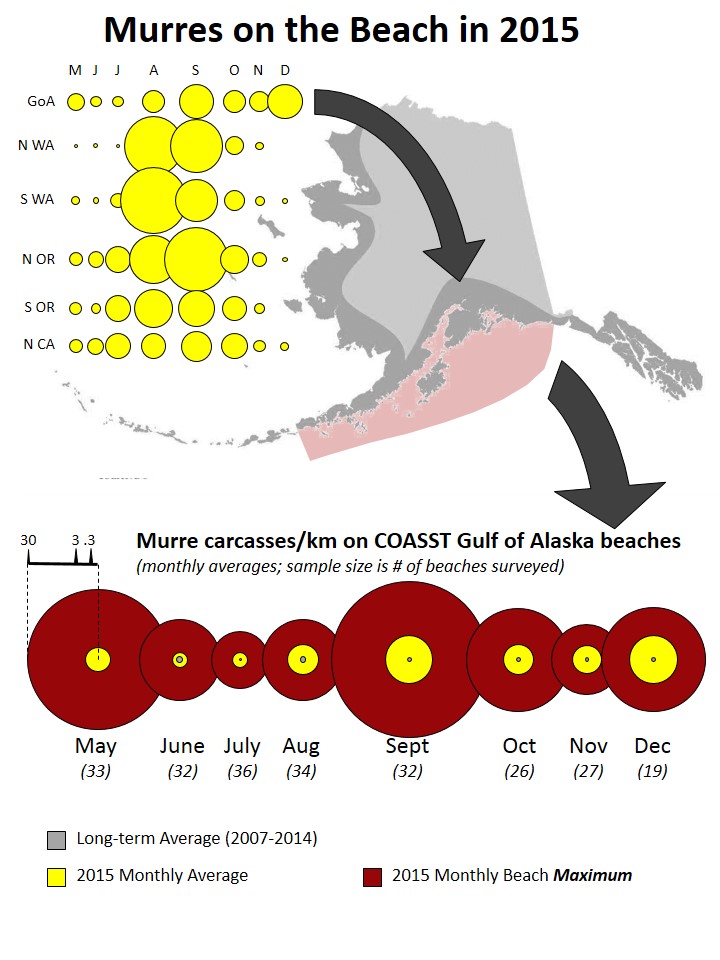 Maximum COASST beach counts (red circles) are significantly higher than the 2015 monthly averages (yellow circles), and maximum anecdotal reported counts are 1-2 orders of magnitude above that.

Many thanks to our intrepid, dedicated participants who are braving long days on rugged beaches to document the extent and magnitude of this mortality event!