The west coast of the United States has been the final resting place for much of the wreckage that left Japan on March 11, 2011, after a massive earthquake and resulting tsunami rocked its shores. One such relic of the tragedy is a small fishing boat belonging to a Japanese high school in Rikuzentakata that washed ashore in Crescent City, California this past April. This boat survived an incredible journey across the planet’s largest ocean.

Students from Crescent City’s Del Monte High School made it their mission to return the boat to Japan free of barnacles and full of compassion. These students understand the devastation a tsunami can cause, as they too were impacted by the event. The earthquake that created the Japanese tsunami also caused a tsunami that badly damaged Crescent City’s harbor. The Del Monte students filmed a video that shows the connection these two cities share. They sent the video with the vessel as a reminder to the students in Rikusentakata that they have not been forgotten and that a midst the unthinkable devastation and loss, there can be small but meaningful steps toward healing. After two years awash at sea, the boat departed Oakland for Japan on September 19th, to be reunited with its rightful owners at last. 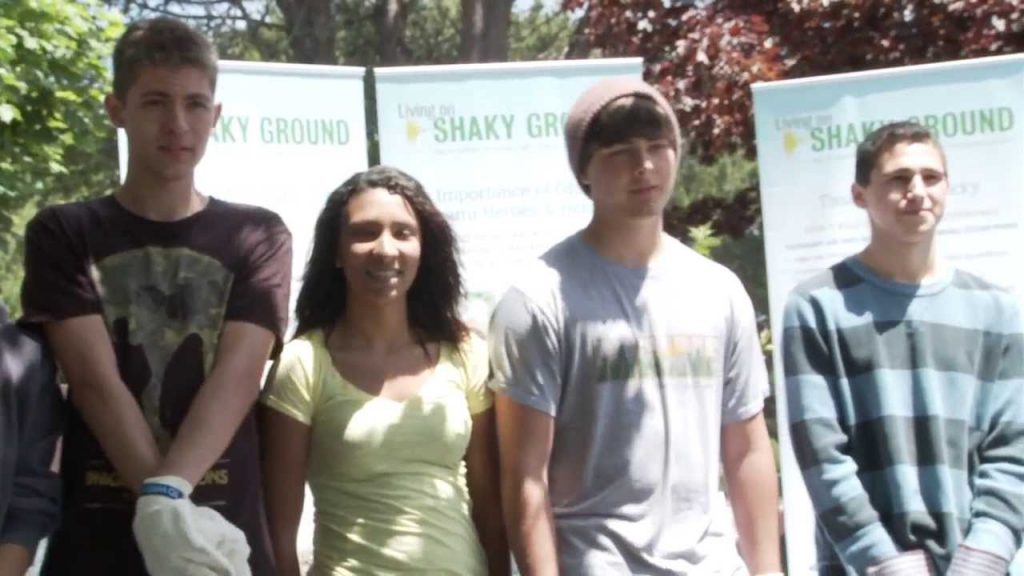 Students from Del Norte High School return the boat to Japan with compassion.

Click here to learn more about this project and see the student’s film.

On the wake of the two year anniversary of the Japanese tsunami, the catastrophic event continues to have detrimental effects on the marine and coastal environments. Two recently published news articles inform readers of the appearance of Japanese tsunami debris in Western Washington and Hawaiian coasts, as well as in the stomachs of marine wildlife. 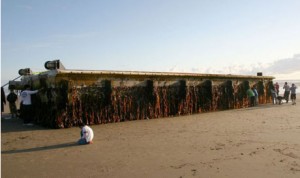 Dock from Japan that has washed up on Oregon’s Agate Beach on June 5th, 2012. Photo courtesy of Oregon Parks and Recreation Department.

Due to the massive amount of debris that entered the ocean after the tsunami event, the National Oceanic and Atmospheric Administration (NOAA) predicts that marine debris will continue to wash up on state shores for the next couple of years. In addition to accumulating in coastal environments and posing a threat to wildlife, the marine debris has raised the concern of introduction of invasive species to our region. When the tsunami initially hit Japan, four docks were washed out to sea. The docks were eventually spotted on the coasts of Agate Beach of Oregon, the island of Molokai of Hawaii, Olympic National Park, and a different region of Japan. The main issue with these docks washing up on foreign beaches is that the docks transfer invasive species. These invasive species threaten biological diversity and will negatively effect coastal environments. The Washington Department of Fish and Wildlife (WDFW) actively works to control the situation, disposing of organisms belonging to invasive species and cleaning the debris. WDFW is encouraging disposal of marine debris and has set up trash bins at Ocean Shores, Long Beach, and Grayland Beach State Parks. For more information on the article and proper protocol for disposing of marine debris, please follow the link here.

In another article, the impacts of debris on wildlife is the focus. Japanese tsunami debris has washed up on Hawaiian coastlines and plastics have been found in the stomachs of fish and seabirds. Plastic items have been recovered with bite marks on them, indicating that some marine organisms have mistaken the plastic for food. A recent study of 64 fish from an array of species has shown that 12% of the subjects analyzed have ingested plastic. Some species had higher percentages of plastic ingestion, with the lancetfish at an alarming 45%. In addition to harming aquatic life, presence of plastics in the ocean threatens humans as well. Some species of fish are prey to other species consumed by us. Ingested plastic could impart chemicals to the body of the fish, raising a potential health risk for those who eat the fish. The effects of plastics in the marine environments is of high concern. For more information, please watch the video and article provided by CNN here.

Since the Tsunami happened in Japan in March of 2011, many beachcombers have been on the lookout for debris of Japanese origins. Determining where debris originated is not always easy and not everything with Asian writing is from Japan. Many products with Japanese writing can be purchased right here in the United States and then quickly find their way to a beach by a careless beach goer.

We have received many photos of marine debris that includes Asian writing. In order to get a better idea about this debris, we’ve turned to Summer Wang, a COASST intern who is fluent in several languages. The following is her analysis.

These three photos are taken on different beaches by COASST volunteers, yet all of them came from the same company in China–one of the most popular manufacturers for food and drinks. Their products have been exported to different countries for years, and most of them can be bought in  Chinatowns or Asian stores here in the US. 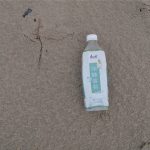 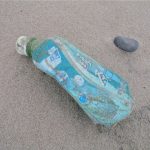 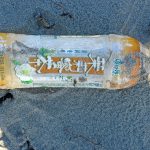 This photo is a milky tea drink bottle, also from a big company in China. Their products include all kinds of coffee or tea, and also can be found in most of the Asian store. 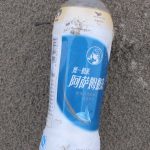 This container is a strong deep cleaner; a product from a Taiwan company called Johnson Diversey. This company is a big global manufacturer particularly in cleaning products. Their headquarters is located in Wisconsin State. 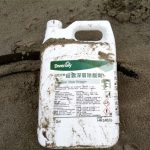 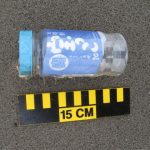 Although, most of the Asian writing looks similar to westerners, a closer look can reveal where they originated from and how they might have ended up on the beach.

Debris from the 2011 tsunami in Japan continue to impact American coastlines. Check out what some Hawaiian fisherman encountered just off the coast of Maui!

Japanese articles from the 2011 tsunami have begun to wash up on Hawaiian beaches. Free floating debris is often inhabited by opportunistic species, such as barnacles and crabs. These creatures are common in Hawaii but scientist now wonder whether this debris will act as a means of transport for invasive species as well.